The relentless march of cell-only households

NHIS has released the latest estimates of wireless-only households in the US and, to almost no one's surprise, the steady increase continues. As of June 30, 2010 26.6 percent of US homes had only a telephone, a sharp increase of 2.1 percentage points since December of 2009. Another 15.9 percent of homes report that they take all or mostly all of their calls on a cell phone even though they also have landline service. The demographics of the wireless only population remain pretty much unchanged—young people, less affluent, less likely to have health insurance, more likely to be Hispanic, etc. 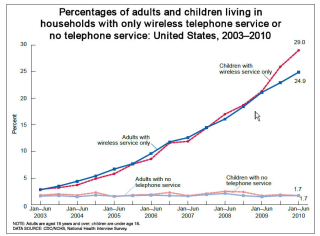 Some us, and I confess that I had one foot in this camp, once believed that as this group aged and became more established they might gravitate back to landlines but there is little evidence to support that. As you can see in the graph at the right (blue line is for adults), if anything, the slope is steepening.

When you look at these numbers it's hard to fathom that anyone doing telephone research might still be calling landlines only, but I see evidence of it every day. Fortunately, there is an emerging body of high quality research that is extremely helpful with the design, costing, and execution of studies that include cell phones. That literature is nicely summarized in AAPOR's 2010 Cell Phone Task Force Report.

For those mobile users sneaking into Web surveys

AAPOR's online journal Survey Practice continues to be one of my favorite places to go for quick updates on the latest methodological research. To wit, the December issue has a nice little piece by Mario Callegaro on mobile users who perhaps unexpectedly show up to take an online survey designed for administration via a laptop or desktop computer. Frequent conference goers have heard lots of papers about the problems of designing for mobile—simple screen, straightforward questions, less than five minutes, etc.). Mario's piece reminds us that the more immediate problem may be dealing with respondents who are ahead of the curve and already expect to do surveys on their smartphone or iPad. He describes how to detect these folks, presents a series of screen captures that show just how badly different mobile devices can scramble a Web survey, and reports on an experiment that shows significantly higher termination rates for mobile versus computer respondents. He concludes with a range of options from ignoring them (as long as they remain a very small percentage of respondents--say, less than 2 percent) to modifying the survey design to accommodate the different screen sizes. It's good advice worth checking out first hand.

We do a lot of very long and complex Web surveys sometimes including multiple DCM exercises, all of which make designing for mobile impossible. Our preference has been to detect the mobile users at the outset and turn them away with a message that says, in essence, you need to do this on a real computer. We've never tracked how many of those people actually come back later but we probably should.

Just about 15 years ago I had the good fortune to collaborate with some friends on a book with the unfortunate title, Computer-Assisted Information Collection. In addition to editing the chapters on new technologies, I wrote the last chapter, a somewhat lame attempt to predict the future of survey research. I was heavily influenced by a book I had just read called being digital by Nicholas Negroponte. A central theme of the book is the gradual digitization of pretty much everything, including all the facts about each of us—our personal histories that define who we are, what we do, where we go and who we go with, what we like and don't like, and, of course, what we buy. In Negroponte's vision this is mostly a good thing because it creates the possibility for a personalized and tailored interaction with the world. Everyone now knows a great deal about us and can interact with us using that information. This could be as important as having my medical records available no matter where I need treatment to the modest convenience of an online bookseller knowing I have a weakness for historical fiction. It was not hard to see in this vision a significantly reduced role for surveys.

Convincing as I found the book and others with a similar theme being written at the same time I nonetheless wondered whether people would go along. Would the benefits associated with having this information available to merchants, service people, doctors, lawyers and Indian chiefs outweigh the natural instinct to choose who knows what about me? We are beginning to see the answer playing out in the realm of online advertising and it's a resounding "No!" Just as MR was beginning to realize on a broad scale the potential value of behavioral tracking on the Internet the impulse of people and governments is to shut it down. Polling data suggests that north of two-thirds of US adults are opposed to the tracking that drives tailored online ads. Government agencies, here and the EU, are studying changes in privacy legislation that would provide consumers protections whose end result would be to significantly degrade the effectiveness of online tracking. Even Microsoft has gotten into the act with plans to provide anti-tracking tools in the next release of IE.

So where might all of this leave MR, once it's sorted out? I think back where we started and that is recognizing that personal information is just that. It belongs to the person and the only way to get it is by asking for it. Historically research has been permission-based, but with the transition to online and especially social media we've come to think that we can skip that step. We are learning that we probably can't.